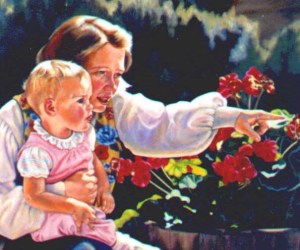 Complimentary colors – the opposites on the color wheel, make for a visual ‘zing’ in a painting.

In my early twenties I was taken back by learning that someone with whom I had attended High School was studying color theory for an entire year at his chosen university.  I shook my head and could not comprehend that one could fill a whole year’s studies on color!  Yellow and blue make green, right?  How could there be that much to know?  At the time I was busily engaged in creating a lot of stained glass windows.  Our company, Fregeau’s Glass Works, was making hundreds of windows and I was actively involved with the color aspect of each one.  We worked with many interior designers and wealthy clients.  Stained Glass was, after all, a luxury.  I had taken a lot of art classes and grew up with an artist mother – a wonderful painter.  I could not fathom that there was that much to learn about color.

I was very wrong.

I was a couple of years into my painting career when I saw someone’s paintings at a local show, and there was such a depth and maturity in his work that I recognized there was something about paintings that I just didn’t know that he evidently did.  And so I asked him for lessons.  The main ingredient I was missing?  A knowledge of color…  color theory is the term.

And so began a learning curve that has yet to quit.  God made a world filled with color and light. This truth permeates every painting.

When the Impressionists came out of their studios into the light of day to paint, their experience with discovering color was “like scales falling off the eyes.”  We hear such dramatic imagery from the Bible when the Apostle Paul was blinded on the road to Damascus, but when he again received his sight, the scales fell off.  Seeing and understanding color was so dramatic to the Impressionists that they used like terms.

English: Their are thousands of artworks created in the art world depicting St Paul. This painting was created by the famous artist called Rembrandt. It hangs on the walls of the National Gallery of Art, Washington DC (Photo credit: Wikipedia)

6 thoughts on “More About Color Theory”

My Companion Blog to Penfrea.com

Mercy4BrokenHearts.com is the other blog I write that offers help and hope for the rough passages of life.

Service Industry Stories and More Since 2012

Encouragement and fellowship for minister's wives

"Obviously, I’m not trying to win the approval of people, but of God. If pleasing people were my goal, I would not be Christ’s servant." Galatians 1:10

I AM A CHILD

The artwork of Peter Hanks

Looking Up and Living in God's Truth and Love

A commentary on life, being loved by God, and random things written to encourage, inspire, and amuse others and myself

Words to Encourage Your Faith, Engage Your Mind, & Examine Your Heart

The Whole Armour Of God

Be strong in the Lord and in the strength of his might. Ephesians 6:10

Courage for the Journey

Exploring What It Means To Be Fully Alive

writing, staying rooted, and receiving the generosity of the world

the church of the future is around a table

"Memories of your life captured as lasting works of art, become family heirlooms."

a blog about my garden and my soft spot for cacti and succulents, travelling and art

L&E was born out of the love and passion for beautiful and inspiring art of all artists and mediums!

A collection of devotionals and inspiring stories

where observation and imagination meet nature in poetry

The works and artistic visions of Ken Knieling.

For Painters, Writers, Actors, Musicians, Photographers, and all who seek to use their gifts to honor the Great Creator